As name shows, these are the instruments that produce sound with the help of air.  Wind instruments are the instruments that contain resonator, a column of air usually a hollow tube like bamboo with different holes in it, and mouthpiece (Reed). Air blows through mouthpiece (Reed) and resonator produce sound of different pitches by vibration. The pitch of sound depends upon length of tube by opening and closing of holes with the help of fingers. 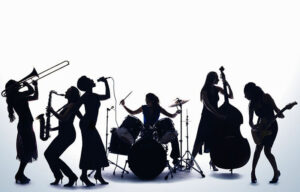 There are mainly two types of Wind Musical Instruments.

A brass instrument is indeed a musical instrument that makes sound by rhythmically vibrating air in a cylindrical resonator with the lips of the player.

Flutes are the tubular shape wind instruments in which focused stream of air blows through the edge of cylindrical tube and then as a result it produces sound of different pitches.

Open Flutes, in this flute, player blow a focused stream of air through the edge of the flute. Edge of the flute splits air stream and it reflects with the inner side of column tube (flute) and then it vibrates and produce sound. Some examples of open flutes are Transverse flutes, panpipes and shakuhachi.

In ancient times, these flutes were made from wood plants where are hollow inside like Bamboo, Grasses, Reeds and other hollow branched trees. Now these flues are made in different metals like tin, copper, bronze. These flutes are also made in some high graded alloys gold, silver, nickel or bronze.

Closed Flutes, these are the flutes in which a player below air into the duct and this duct brings the air into the sharp edge within the closed tube and sound is produced. The pitch of sound can be changed by opening and closing of holes on the closed flutes, it also depends upon the length of flute. Examples of closed flutes are recorder, ocarina, and organ pipes.

Reed is a thin strip which is tongue shaped cut material that vibrates and as a result sound on a musical instrument is produced. Reeds are made of wood or synthetic material.

Reed musical instruments classified on the basis of types of reeds and number of reeds. Reeds may be single reeds, double reeds, quadruple reeds or free reeds.

© Bagpipes for sale 2021 All rights reserved by Great Kilts

Your cart is empty Continue Shopping

Successfully added to your cart.